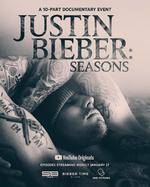 据此次纪录片合作方OBB报道，这个纪录片会涉及到很多东西，例如名望、头脑健康、药物、婚姻、信仰、媒体、在聚光灯下成长，以及新的音乐。For the very first time, the world’s biggest superstar, Justin Bieber, is pulling back the curtain and giving fans an intimate look into the past few years of his life. From the joys of marriage to the struggles through difficult seasons, Justin opens up to reveal his biggest challenges as he gets back into the studio to record his first album since 2015. Watch the full trailer now, which features a sneak peek of his new single "Yummy.” Justin Bieber: Seasons a new documentary series premieres January 27 and you can choose how you want to watch - get early access to new episodes and watch the series ad-free with YouTube Premium or watch two new episodes each week with ads for free on YouTube.